The Evolution of Digital Transformation and the CIO

Evolution is an often misunderstood concept.  Our elementary vision of it is of fish growing legs, crawling out of the muck as alligators turning into rodents then monkeys then apes and finally something resembling people.  Of course, this is not how it works. In fact, evolution is quite complex. On one hand, it requires billions of mutations spread over millions of organisms. Many failures die out while others stick and eventually the whole system reaches a tipping point leading to a great evolutionary leap. On the other hand, drastic environmental changes can lead to significant mutations within a few generations. Both types of evolution are relevant when looking at digital transformational and the role of the CIO.

Technological evolution follows similar patterns as biological.  Much of it happens as a result of millions of small innovative changes that take place before the next technological era occurs.  Take for example, the transition between the agrarian age to the industrial age.  Many innovations, discoveries and failures were made over hundreds of years until they culminated into the technologies that enabled mass production. This similar process has been taking place over several decades culminating in the digital age.

Just some examples of current technological “mutations” include:

Any of the above can be considered a major advancement in applied technology, but we happen to exist in a time when they are all maturing into useful applications simultaneously and being used to transform entire industries. It is from this aggregated development and maturity that we will likely see the next great leap as these new technologies come together to create the next tipping point.

One specific example of how this works is Jaguar’s augmented reality widescreens.  You may have heard of heads up displays (HUD) for fighter jets. Essentially, it is a transparent display that presents data in a view that allows the pilot to see the information and the viewpoints beyond.  Well, Jaguar is also applying this technology to their automobiles.  The HUD highlights obstacles in red, yellow, or green to indicate their distance.  It allows the driver to see through the sides of the car so they appear to be fully transparent.  It can even project a “ghost car” that the driver can simply follow instead of listening or looking down to a navigation device.  Meanwhile, Tesla, Google, and Uber are taking it to the next level by producing cars that can autopilot or don’t even need a driver in the car.  These changes are literally transforming the automotive industry.

As the bridges between accessibility, artificial intelligence, and automation closes, organizations are able to move faster and faster and bring us closer to the evolutionary tipping point.  One day, in the not too distant future, we will be able to clearly identify the “mutations” that enabled the leap to occur like the ape tossing the bone in 2001 a Space Odyssey (that, when tossed, turned into a satellite), but in the midst of the process, the specific contributions are difficult to foresee. We just know it is coming. 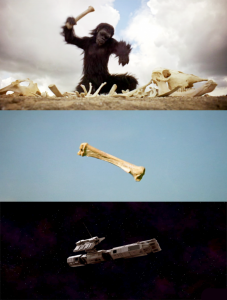 For the CIO this presents a challenge. The CIO has to evolve as well, but in the way that responds rapidly to the new environment. There are so many possibilities and opportunities, yet the outcome is uncertain. So, how do you know what strategies to pursue and when to pursue them? How do you know what capabilities to build when you are not certain of the requirements?

While the final evolution of the CIO’s role is uncertain, there are several steps that one can take to be to be prepared for the environment:

The Business Strategist – The CIO has a new role in leading business initiatives rather than just the technology applications.  The focus of the CIO is changing from that of controlling IT spend to meeting and managing business outcomes.  You need to review your strategic planning from a multi-horizon point of view, establish a clear vision based on business objectives, and develop an agile execution approach.  Moving faster only helps if you are moving in the right direction.  Otherwise, you might find yourself in Death Valley when you were trying to get to Yellowstone.

The Change Leader – CIO’s are often responding to or causing change. But you also need to be a change leader which means becoming a visible and active advocate communicating the purpose of change and the expected results to the employees and stakeholders. A CIO cannot afford to be an introvert. You need to engaged and interact face to face with all constituents.  This will enable you to accelerate change when necessary and keep the organization engaged.

The Framework Architect – Volatility and uncertainty mean that the CIO also needs to develop an ecosystem and structure that is flexible and adaptable to variation.  This goes against the grain of traditional, hierarchical command and control approaches into more organic structures where team members are embedded into the organization they serve, collecting intelligence and testing innovations. This way when one or more components changes the ecosystem is able to adapt. Just like a smart phone can incorporate different apps within a single framework.

The Keeper of Data – After all of the strategy discussions, where the rubber meets the road is with your data.  No matter where your ever-changing path leads you, your data needs to be there with you.  Now, where it is stored, how it is stored, and how it is retrieved may all change, but in the end you will always need quality data (customers, products, clients, staff, etc.).   Your data needs to be in an agile environment and available so the business can respond to an ever-changing market.  Yes, if you don’t already have a BI tool you could go out and get one, but you need to be thinking large scale.  In order to evolve you need to think not just outside of the box, but outside of all existing boundaries.

The Chief Security Officer – Protecting data extends to ensuring that the data you keep it safe from intrusion. This is more and more a challenge as there are more entry points and methods available for those who want to benefit from your data or just want to disrupt the world. You must be on top of these methods but also build systems that adapt and advance faster than those with bad intentions can think.

As technological evolution happens through the trial and error method until the tipping point is reached, the CIO needs to evolve by being responsive to the environment over a short period.  Fast, flexible, and fluid are all traits that are import, as is being the sponsor of change. In the end, when we look back we will see that it was the CIO with the combination of great leadership skills and promoting innovative change that really led us all into the next digital age.

Ralph has 25 years of Information Technology experience covering all facets of technology disciplines. He has a track record of accomplishments across multiple functional areas with deep expertise in developing and delivering customized solutions that meet and exceed client goals and expectations.  MSSBTA.com