Complacency – The Spike Strip of the Business World

Spike Strip: (also known as traffic spikes, tire shredders, one-way traffic treadles, stingers, stop sticks, a stinger in police slang, and formally known as a tire deflation device) is a device used to impede or stop the movement of wheeled vehicles by puncturing their tires. (Wikipedia)

Complacency: A feeling of contentment or self-satisfaction, especially when coupled with an unawareness of danger, trouble, or controversy. (The American Heritage® Dictionary of the English Language, Fifth Edition. Copyright© 2016 by Houghton Mifflin Harcourt Publishing Company.)

We’ve all watched the docudramas and YouTube videos – The suspect is speeding away believing he can out-run or out-smart the police, the officers in chase call for the deployment of the spike strips, and soon the tires are flat and forward motion has stopped or greatly degraded. How is the spike strip relevant to the business world? Keep reading…

As spike strips are to tires, complacency it to an organization: it deflates innovation, stifles creativity and impedes or stops the organization’s forward movement, what we call Transformation. This can occur at all levels in the organization or, in its most damaging form, it can afflict the organization as a whole. We’ve seen the impact of organization-wide complacency: Motorola’s comfort level with analog and refusal to embrace digital; Nokia snubbing the touch screen on mobile devices; Circuit City, Sears, K-Mart, the list goes on and on. These corporations were once leaders in their industries!

The above definition of complacency has 2 key elements; the feeling of contentment or self-satisfaction (not a bad thing) and an unawareness of danger, trouble or controversy (definitely a bad thing). If sustained for too long, contentment breeds idleness and laziness, and following suit, the unawareness of danger or trouble comes from a lack of diligence and preparation. Either way, complacency is will not make you a better company, and in the long-term will drive your company into the ground.

Stop Complacency in its Tracks

As a leader you must identify complacency in the workplace and address it. Complacency starts at the individual level and expands until it engulfs the entire organization. It can first be found with a couple of people sitting in cubes, muttering, not doing what they need to do. Glenn Llopis had a great article on Forbes.com: 10 Signs Your Employees Are Growing Complacent In Their Careers. If you can tap into the lower level, at the source of the complacency, issues like these are relatively treatable. Ask for their feedback and respond with something like, “I can help you fix that,” or “Let’s do something about that.”

Learn from Others’ Mistakes or You’re Doomed to Repeat Them

Complacency at the leadership level means the organization is headed for insolvency. Once top-tier senior leadership people become complacent, who is going to tell them that they are wrong? It is like Circuit City or any other business failing to recognize disruption in the marketplace. Then, they look around at their competitors outcompeting them and realize, much too late, that they cannot catch up. Their competitors have upped their game so much so that the complacent organization cannot compete anymore and is doomed to go the way of the dinosaur.

Ask your kids if they have ever known a great Motorola. They’ll respond with something like, “No,” or “Motorola makes cheap phones.” However, at one time Motorola was pretty much the leader in everything electronic: televisions, high frequency radios, radio sets, and everything electronic with high reliability. Motorola had premium phones and pagers. I bought my Motorola Start Tack and was pretty excited about it. The revolution started with a phone in the satchel in my car that weighed 7 pounds to a phone I could fold in half and clip to my belt. It was the size of my hand and weighed about a pound.

Then, back in 1998, Motorola’s decided to go with a satellite-based phone system. They thought satellite phones were going to be the next thing. Motorola created a $1.5B satellite infrastructure company called Iridium to mobilize the phones that cost $3,000 to buy and $5 per minute to talk. Time Magazine labeled this bankruptcy in 1999, one of the largest tech failures in history.¹ Motorola thought people would be carrying around sat phones rather than cell phones. However, the marketplace went where they didn’t expect. The world went with smaller and cheaper phones that could text, then it went to digital phones, and then smart phones. Google bought off Motorola’s cell phone division and sold them to Lenovo.

At one time, when you owned a Motorola phone, you owned a classic piece of American technology, but they did not change. You can find similar cases with IBM. They thought they would stay with mainframes instead of PCs. Today, IBM is known as a services company, developing software and IBM Watson when they could have been players in the PC arena. Companies like Motorola, IBM, Circuit City allowed this to occur in their industries; so did taxi companies and bookstores in today’s world. Any industry where a disruptor has fundamentally changed their existence or their ability to do business, you will find leadership that has allowed complacency to creep into their organization. Nobody in senior leadership at these organizations made the connection that new and innovative companies were growing in the marketplace, while they were losing market share. When companies allow this to happen, after two years they will be out of business. Consumers adapt to innovative products and services and no longer want what complacent companies offer.

Good to Great to Gone 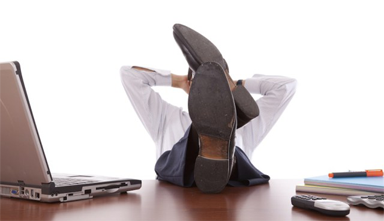 Complacent senior leadership can be found everywhere. They are the “Good to Great” companies that Jim Collins spoke about in 2004, where for 20 years these companies beat the S&P 500 by 3 or 4 times. After Jim Collins published his book, approximately a third of the companies went bankrupt. Those companies that survived are no longer outdoing the market. Why? Because senior leadership became complacent! They allowed the praise of an author to fill their egos and give them a false sense of security to cozy up to idleness and spurn innovation.

“We are now faced with the fact that tomorrow is today. We are confronted with the fierce urgency of now. In this unfolding conundrum of life and history, there “is” such a thing as being too late. This is no time for apathy or complacency. This is a time for vigorous and positive action.”

And these words are as true today as they were 50 years ago. Avoid the spike strips that are in your path and replace the wheels that you are dragging along. It is time for you to act.

Wayne has more than 30 years’ experience in planning and program management for organizations ranging from the Department of Defense and Fortune 100 companies to privately-held corporations.  He has worked as an internal and external consultant in a variety of industries and has been on both sides of the RFP process. Wayne earned a Masters in Information Systems Management from Webster University and a BS in Civil Engineering from The Ohio State University.

Tags:
Change ManagementLeadership
« Embracing Business Transformation through Digital Technology Should be a ‘No-Brainer’
IoT and a View from the Corner Office »
Share